Looking for an alternative V-Day card? Whether it’s an unsolicited Dik-Dik pic or you need a subtle way to tell someone you’re crazy for them, Dippyfish has you covered.

Dippyfish Cards captured our attention back in July when we featured her awesome ‘Gin’ card – and when we saw she was back again with some awesome V Day creations, well we a) just had to show you, and b) had to get a bit of the #backstory… because if you know Dippyfish cards, you’ll know that with every unique design comes an even more unique story… 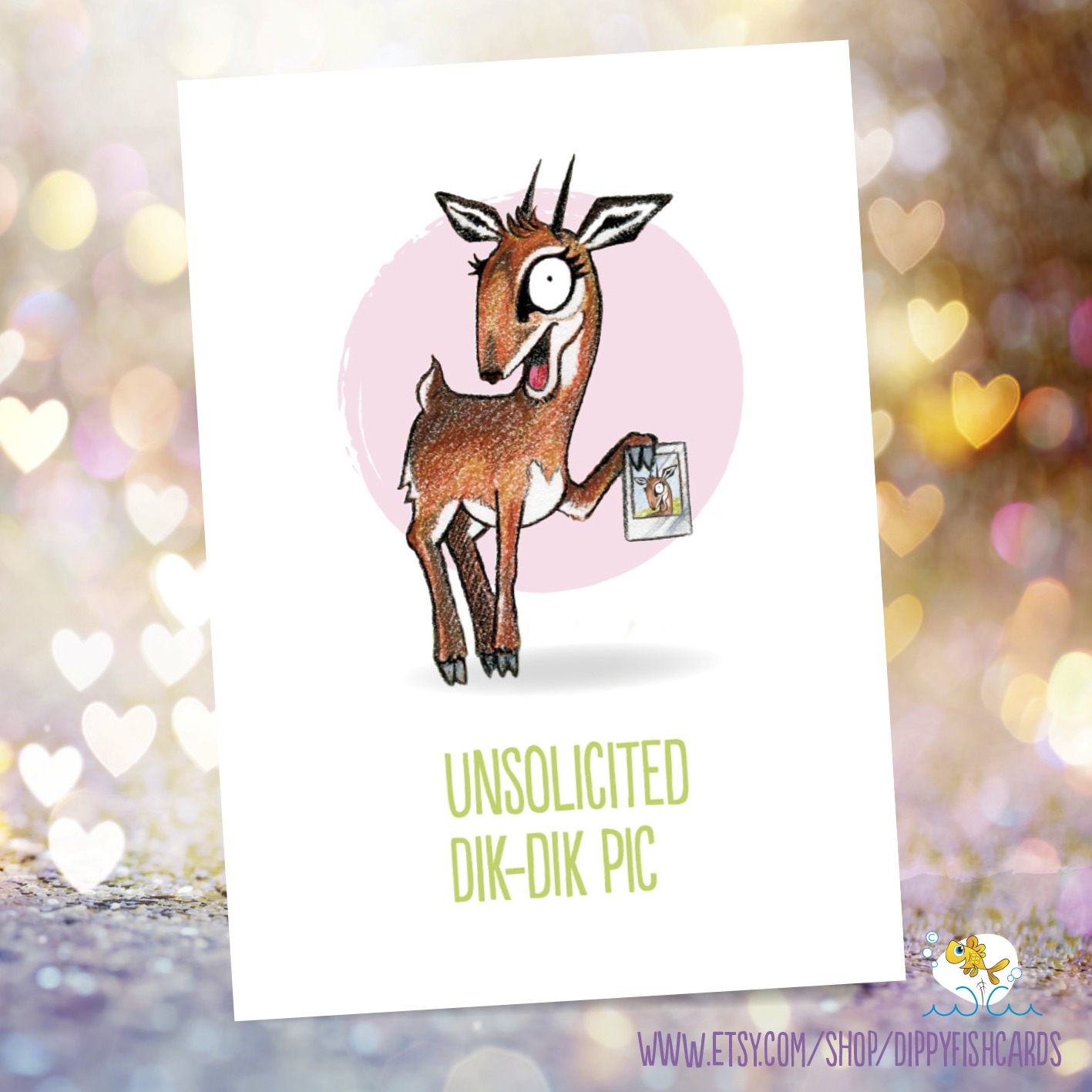 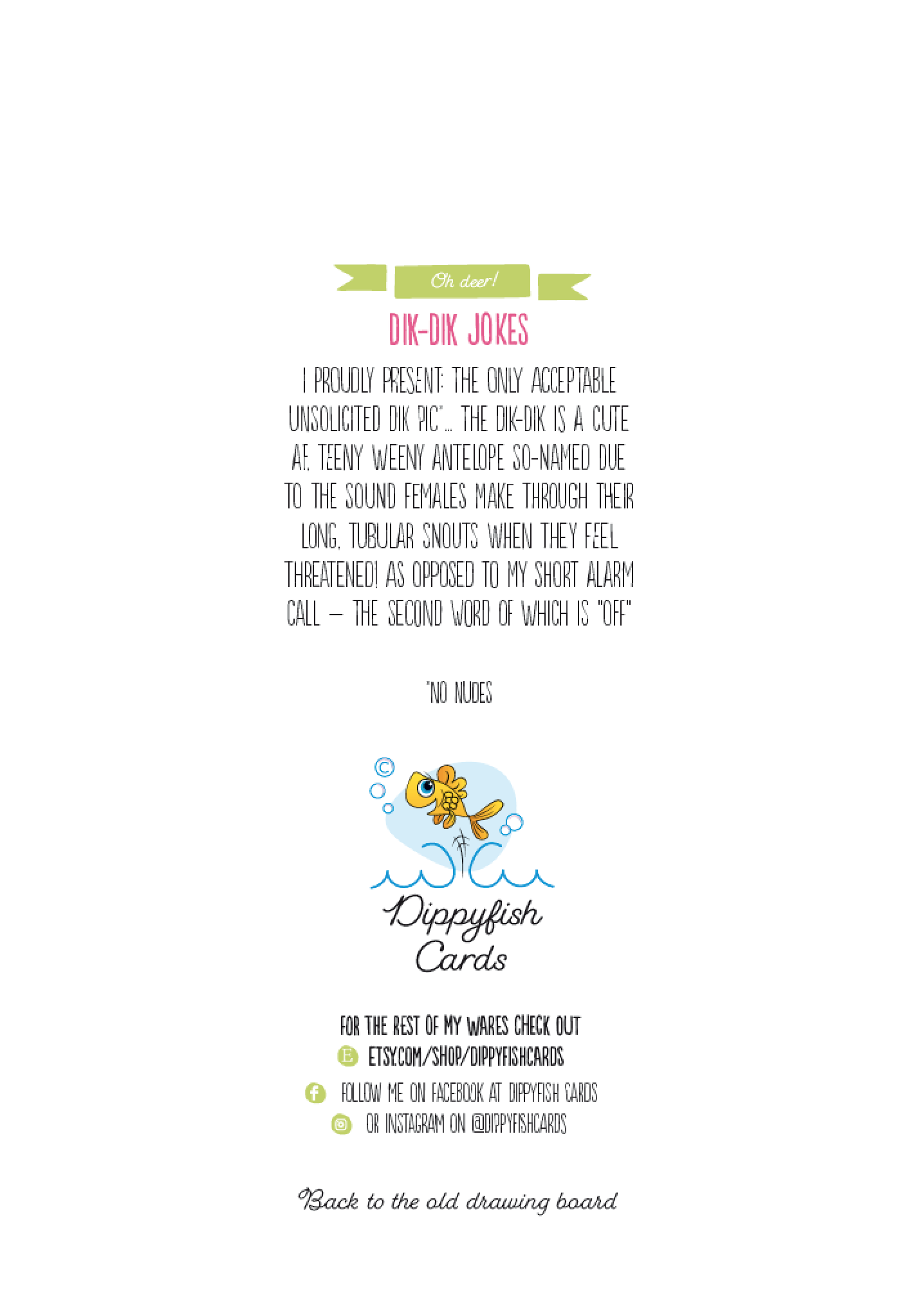 Right, enough of that (for now)…

Amelia, what’s the story behind your Valentine’s Day collection?

“I have probably had about five good Valentine’s Days in my whole life really, it’s not a good innings love-wise. I have had some truly crap romance experiences (a couple of nicer ones have taken the edge off, but hey. I’m not going to be giving Cupid five stars on trip advisor any time soon). But I am sanguine, as ultimately one of the worst (about 7 years ago) was the catalyst which set me on course for beginning this card nonsense for real… and that is making me happy these days…” 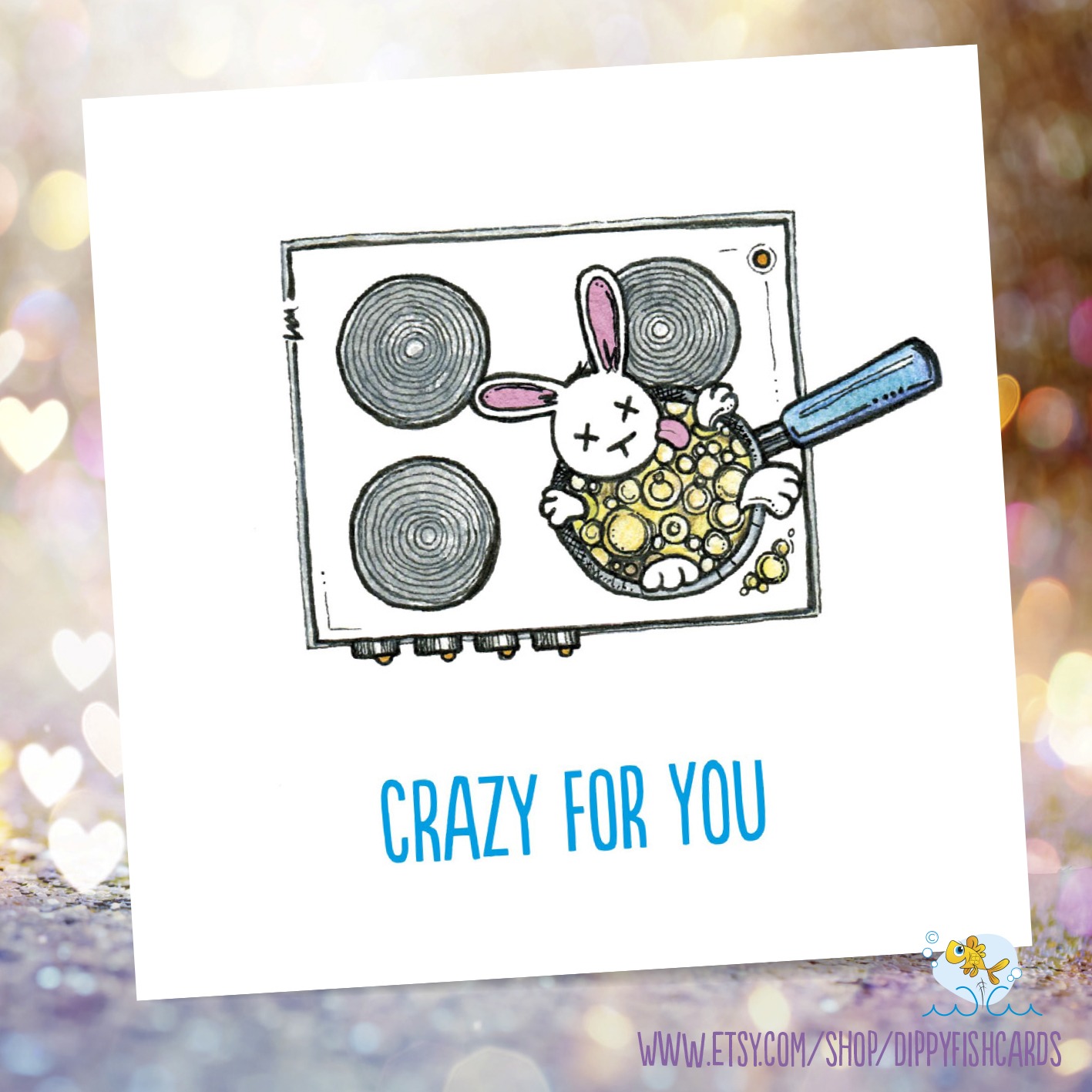 “Crazy for you/Bunny Boiler is my slightly less ‘schmaltzy’ Valentine’s card. Inspired by a certain movie of my youth… (and an ex-boyfriend who was less than lovely in the final analysis…)

He was a typical commitment-phobe, baulking at any suggestion of there being any real emotion involved in our relationship, but I liked him and persevered despite some fairly shoddy treatment. I hoped the whole ‘anti-Valentine’ feel of that card meant I could send him something (which I wanted to do) to tell him I liked him, without him freaking out (which he would have done had it been less ambiguous)…

As it was, he dumped me about a week before Valentine’s Day – something which happens to me a lot for some reason. So, I never got to send it to him. I was gutted, and more gutted that I couldn’t send the card.

Instead, I sent it to four or five mates who all deemed it utterly hilarious and said: “You really should try and sell this stuff.” 6-7 years later and I finally got around to it.” 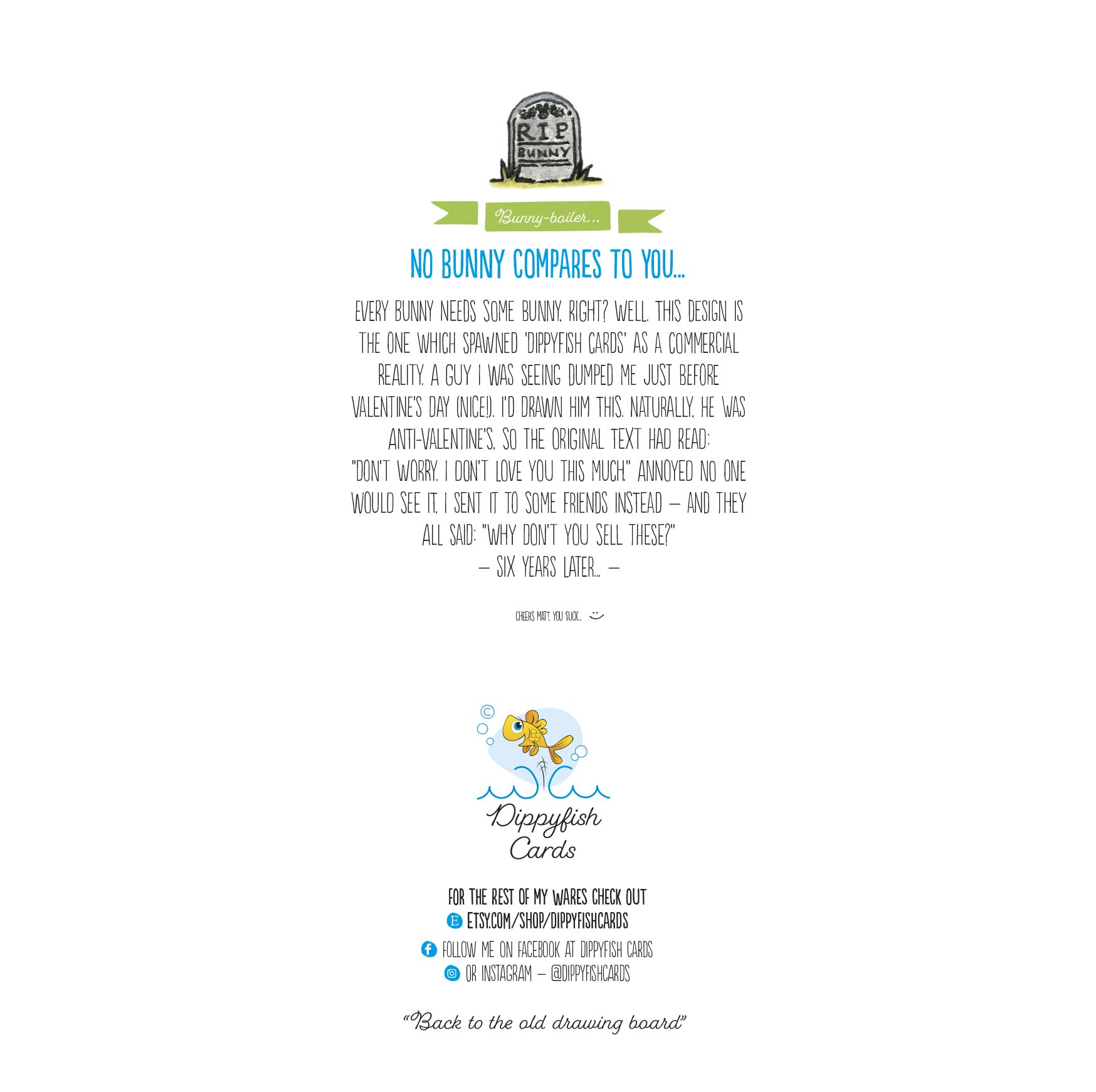 Where’d you get your inspiration for these hilarious cards?

“Things like that (and my slightly warped, inappropriate sense of humour, in combination with my love of a good pun/song lyric) are possibly why a lot of the cards have a little bit of an edge. But you know, despite being a career singleton, I’m a romantic at heart (Super-Like is from a relationship of a more recent vintage. I’ve been out with nicer people since that particular guy). Ultimately, I love celebrating other people’s relationships (and glorious life events in general) even when I don’t have a significant other, or anything going on myself. Solace in illustration… Selfless ain’t it. I’ll probably be sainted.

Explain your cards, in a nutshell

“Anyway, I like the idea that a lot of these are a little ambiguous. Which means you could send them to your significant other whatever flavour they are. I like the idea of universal greetings. It’s very pro-humanity.

And if you don’t have a significant other? The Dik-Dik and Milkshake cards work as anti-Valentine and Galentine cards. I even sent the Bulldog (very Mills and Bone, amirite?) to a divorced mate recently… Ha ha ha”

“So yeah, most of my cards are a bit multi-purpose (most of the Dirty Birds range – all cocks and tits and boobies – also work for a cheeky Valentine greeting as well as birthday/whatever days). That versatility was originally borne from me wanting to send them for all kinds of occasions and to all genders (male, female and beyond the binary), but now, it’s handy cos then they have a more universal appeal when I am selling them.” 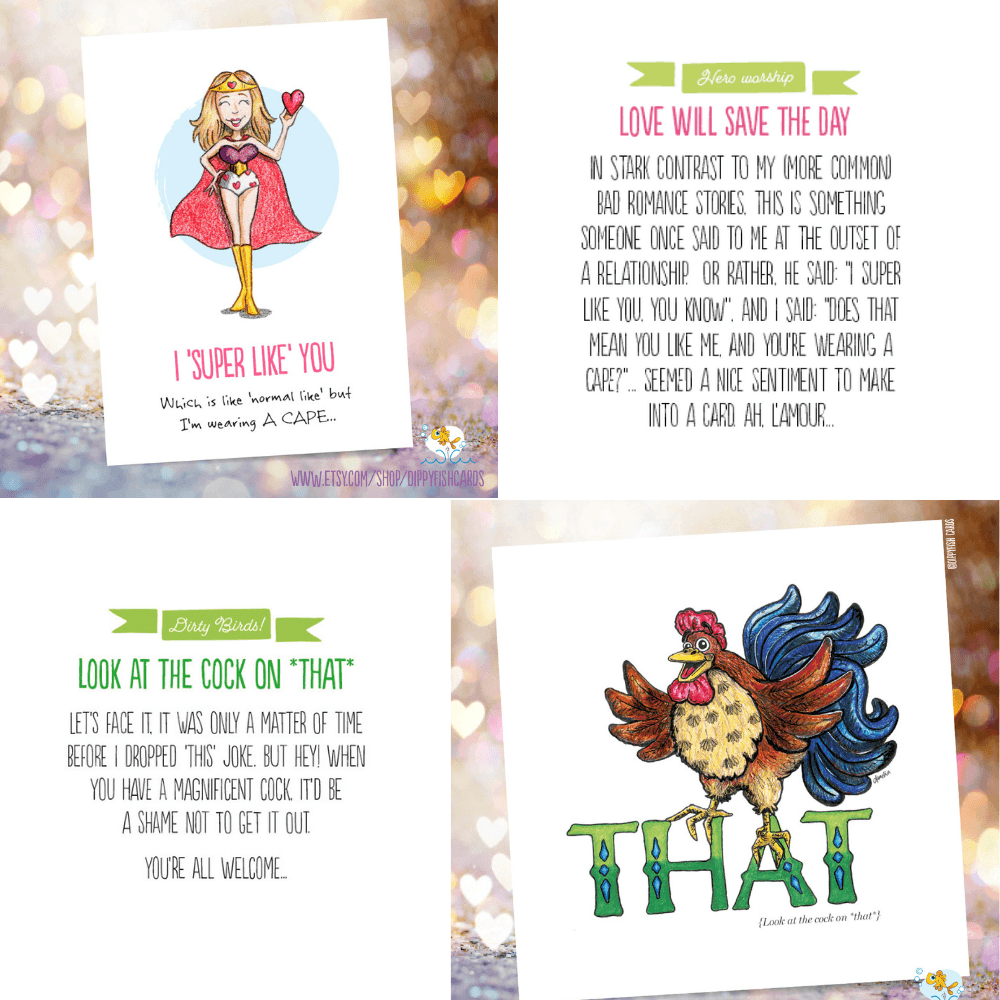 Inspired to create your own V Day creations? Why not show us what you create over on social media and tag us using #ProudlyPrinted? We love seeing your designs!

Ready to hit the presses? Explore our huge range of Greeting Card options – from the textured and tactile like Dippyfish uses above, (her cards are printed on the ‘watercolour paper-style’ Gesso stock, which maintains the hand-drawn feel of the original artwork) to a touch of foil, we’ve got you covered no matter your style.

One year on – Talking Top Drawer with Ted & Kip

Using the latest colour trends to drive your success

Card Catch Stickers are the new kid on the Printed.com block. Favoured by many major retail outlets and Greeting Card sellers, let’s discover why

When it comes to custom Greeting Cards, we know what we’re doing at Printed.com. Get your inspiration fix with the latest designs from our customers

This year we partnered with The Sun to help raise money for Young Lives vs Cancer, with a charity Christmas Card competition. Check out the winning designs right here

Greeting Cards have a whole new meaning in 2020 and it’s the perfect time to get creative with some fresh ideas. From the simple and sweet to the glittering and gold, read on for our tops tips for paper choices and special finishes, as well as a deep dive into some recent customer inspo…